A team of CDC (Centre for Disease Control) officials arrived in New York to investigate a case of paralytic polio in an unvaccinated adult and support local state health department officers administering Polio vaccines. A recent case of the disease was confirmed in downstate Rockland County in July. This was the first case to be found in the US in over a decade as the disease was confirmed eradicated in 1979. However, inoculations have decreased over the years due to missed appointments during COVID-19 and local resistance to vaccinations.

Bryon Backenson, director of the state Health Department’s Bureau of Communicable Disease Control advised “The past several years have led to declines in vaccination rates, particularly in children, and it’s something that can lead to the resurgence of new cases of the long-forgotten disease, like polio,”

Polio, or poliomyelitis, is a disabling and sometimes life-threatening disease caused by poliovirus1. This virus can spread from person to person, and causes infection to the host’s spinal cord, causing paralysis. It is estimated, that one in four people infected with poliovirus will develop flu-like symptoms, including fever, tiredness, nausea, headaches, and stomach pains which last usually 2 to 5 days1. Serious symptoms generally develop in a smaller proportion of the population, leading to complications including meningitis and paralysis. It is estimated that as many as 1 in 1000 children, and 1 in 75 adults may develop the paralytic infection2.

There are three types of polioviruses, consisting of type 1, type 2, and type 3. Type 2 poliovirus was eradicated in October 2019, with only type 1 wild poliovirus remaining3. The use of vaccines has dramatically eliminated the threat of poliovirus, with oral polio vaccines and inactivated polio vaccines being widely available. 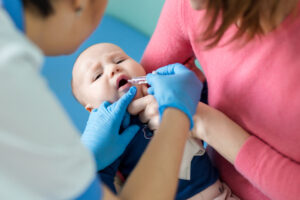 In June, public health officials declared a national incidence in the United Kingdom, after routine surveillance of wastewater in London, found evidence of community transmission of poliovirus for the first time4. The first positive sample had been detected from the Beckton sewage treatment plant in February of this year, with further positive samples having been detected since. This outbreak is believed to have started by a person returning to the UK after having an oral polio vaccine and spreading it locally, as this method of vaccine can lead to shedding of the virus in the faeces for several weeks4.

The United Kingdoms’ last natural polio infection was in 1984, and the country has been declared polio-free since 20035. To date, no cases of polio or related paralysis have been reported since this outbreak, however, extreme vigilance for patients who are demonstrating symptoms of poliovirus is advised. As with most outbreaks, the longer the virus spreads, the greater the risk of transmission. Poliovirus is spread through contact with faecal secretions or through throat secretion contact. The incubation period for the virus ranges from 3-21 days, however, carriers and some immunocompromised persons may shed viral particles for longer than 6 weeks2.

Poliovirus is resistant to many disinfection products, including alcohols

Poliovirus is resistant to many di 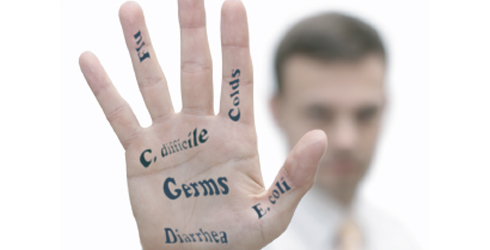 sinfection products, including alcohols, due to its non-enveloped structure and can demonstrate a much higher survival rate when it is transferred by direct contact of surfaces i.e., hand-to-surface transmission6

Kersia-manufactured NaDCC effervescent tablets are EPA-approved surface disinfectants designed for hospitals, hospitality, sports venues, along with health and childcare facilities. Our NaDCC surface disinfectant tablets are used all over the world, fighting the pathogens that cause HAIs (hospital-acquired infections), they are currently used in the top five hospitals in the US.

In the US, our NaDCC effervescent tablets effectively eliminate poliovirus @1076ppm in 4 mins on hard surfaces. Click here to

Would you like to know more about our medical products in the USA? Contact us here: nadcctablet@kersia-group.com

Kersia NaDCC effervescent tablets are so easy to use, transport and store! They can be used with spray bottles, mops, microfibre cloths, flip top bottles and mechanical sprayers (spray particle size >40 microns) Contact one of our customer relations team experts to find out more here