The monkeypox (MPX) virus was first isolated from a macaque monkey in 1970. Monkeypox is a viral zoonosis, meaning that it can be transferred between humans and animals, with symptoms very similar to those found in smallpox patients[1]. In unvaccinated individuals, monkeypox can result in flu-like symptoms and rashes on the skin, with rare cases leading to fetal loss in pregnant women [2].

Symptoms of monkeypox in humans are similar to smallpox but milder. Beginning with a headache, muscle ache and fatigue, the main difference is that monkeypox causes swelling of the lymph nodes. The time from infection to symptoms (incubation period) is normally 7-14 days, however, this can vary from 5-21 days.

Approximately 1-3 days after the fever, a rash develops, often beginning on the face, then spreading to other parts of the body. Lesions develop and progress through the following stages before falling off:

The illness typically lasts from 2-4 weeks [3].

As of the latest communique at the time of writing, the WHO’s (World Health Organisation) latest figures suggest 92 confirmed cases and 28 suspected across 12 WHO member states. WHO is suggesting all potential cases be investigated, confirmed and isolated until lesions have crusted, scabs have fallen off and a new layer of skin has formed [4].

Prevention of monkeypox can include avoiding skin to skin or face to face contact with anyone who presents with symptoms, practising safer sex, proper hand hygiene and cleaning procedures (soap and water or alcohol-based hand disinfectant) To help reduce the risk of transmission the CDC recommends that surfaces in rooms occupied by infected individuals are disinfected using a hospital-grade disinfectant. In addition, any portable equipment must be disinfected if it is removed from the patient room and linens, or bedding must be completely sanitized after use with cautions taken to protect employees handling laundry[5].

As you would expect with a virus that rarely causes outbreaks of infection in the US there are presently no disinfectants with a kill claim for monkeypox and no laboratories that could perform the testing needed to obtain EPA registrations. In response to the CDC declaration of an Epidemic, the EPA has activated the Emerging Viral Pathogen protocol for a large, enveloped virus (class 2a). Both Klorsept and Klorkleen 2 have the EPA emerging viral pathogen claim class 2a on the master label and as such our tablets are EPA registered as effective against the monkeypox virus. In dirty conditions, this would require a solution of 2153 ppm (minimum) for a contact time of 1 min. 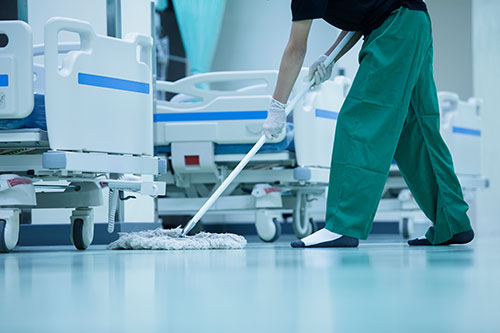 Find out about the effectiveness of NaDCC here

Refer to the EPA website at https://www.epa.gov/pesticide-registration/emerging-viral-pathogen-guidance-and-status-antimicrobial-pesticides for additional information.